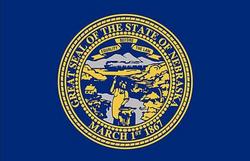 Americans call Nebraska the corn state. Nebraska got its official name from the Sioux language. “No Brashe” means “smooth water”. This was the name given by the Indians to the Platte River, the largest river in the state, except for the Missouri.

Almost the entire territory of Nebraska is located in the steppe zone, conditionally divided into two regions – the eastern Dismembered Plain and the western Great Plain. In the extreme west of the state, there are spurs of the Front Range (Panorama Point Mountain, 1653 meters) and the Blue Mountain Ranges. The climate changes from east to west: from temperate continental humid to semi-arid. Seasonal temperature differences are significant. Nebraska is located in the Tornado Alley area, so tornadoes and hurricanes are common for the state.

Nebraska is an agricultural state. The leading place is occupied by the cultivation of cereals (especially corn), pigs and cattle.

Before the European development of America, Nebraska was home to the Sioux language group: Missouri, Omaha, Lakota, and others. Active research of the region took place at the turn of the 17-18 centuries. The surge in population growth occurred in the late 1840s during the gold rush years and after the 1860s when the Indians were evicted on the reservation. In 1867, Nebraska seceded from the territory of Kansas-Nebraska as the 37th state of the United States. In the year of the “cold war”, the center of the US Air Command was located here.

Major cities are of great tourist interest in Nebraska. Omaha boasts several theaters, an opera house, the famous Henry Dorley Zoo, several museums, and music festivals. Lincoln is also among the “cultural” cities of Nebraska. It is home to the US Independent Film Center, several museums, an art center, and a university.