How Does a Foreign Doctor Get Licensed in the US? 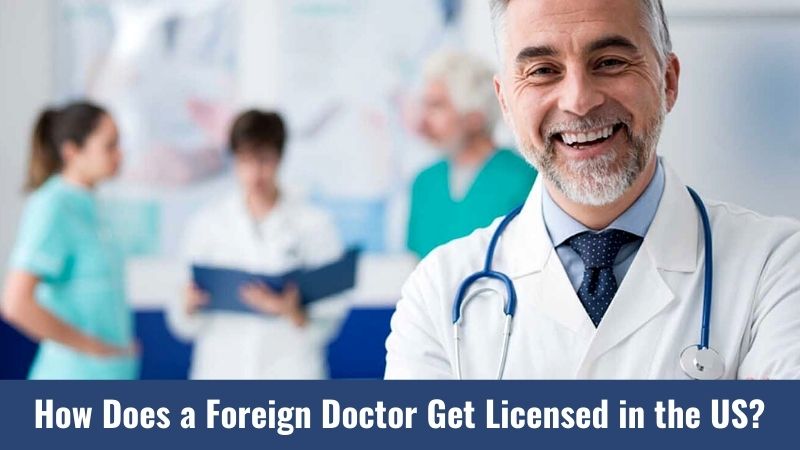 Recently, more and more foreign physicians are thinking about changing jobs. Those who speak English well enough choose the USA which can offer high wages, very favorable working conditions, and career opportunities. And these are not just empty words. Everyone knows that in many states the salary of a physician can reach $600 a year. Of course, such salaries make the life of a doctor not just comfortable but really luxurious and rich. However, all this comes for a reason.

Medical education in America is one of the most expensive and lengthy in the world, so either very talented or very wealthy students become doctors there. This path, although quite difficult, guarantees a 100% result. After studying at the American medical school and residency, the doctor receives a license to practice and can safely start working. What should an ordinary foreign doctor who has completed 6 years of university studies and postgraduate internship do? Many will say that it is quite difficult to confirm a doctor’s diploma in the United States, however, as our practice shows, these difficulties are caused rather by ignorance of the entire process and requirements, rather than by some specific difficulties. According to ECFMG statistics, about 44% of foreign medical graduates annually take the USMLE exams and enter the American residency, which is the last stage on the path to becoming a specialist and acquiring a license to practice medicine. Moreover, according to the American Medical Association, foreign medical professionals accounted for about 29% of the total number of doctors in America. These figures show that it is realistic to become a doctor with a foreign diploma in America, but for this, you will have to go through a considerable number of stages.

The regulation of medical practice and the issuance of licenses in the United States of America is handled by separate so-called State Medical Boards (i.e., state medical committees). According to American law, every doctor who wishes to get a license must a) have at least 4 years of medical school (i.e. university), b) complete a compulsory residency in an accredited American healthcare institution, and finally c) pass the USMLE exams. It should be noted that practice without a license is a gross violation that entails administrative and criminal liability. The requirements of different committees may differ. For example, in New York State, a foreign doctor will have to complete a minimum of three years of residency, while in Wisconsin this period is only one year. The number of attempts that are given to pass the exams may also differ from state to state. It is also important to remember that all requirements change from time to time, so a physician who decides to get a license in the United States should consult with a representative of the state committee to clarify the current requirements.

Physicians who have received their degrees from foreign medical schools must confirm their qualifications by being certified by ECFMG. This organization is engaged in the certification of foreign medical graduates and verification of the authenticity of their knowledge. The document issued after certification serves as a confirmation of the doctor’s readiness to undergo accredited postgraduate practice (i.e. residency) in America.

Application for ECFMG certification must be submitted through the Interactive Web Applications (IWA) online system, but before this, you must get a USMLE / ECFMG Identification Number through the identification process. This procedure is free of charge and consists in providing the candidate with personal data, contact information, as well as data on completed training (the diploma must be issued by the institution that is included in the WDOMS database) and the subsequent issuance of a unique number that is used as an identification name in the ECFMG system. After being assigned an identification number, the candidate must apply for certification and pay an administration fee of $65. Once paid, a candidate can apply for the USMLE Step 1 exam.

In order to be admitted to the residency, which is a prerequisite for getting a medical license in any US state, an American medical student must pass three USMLE exams, namely:

The first exam is usually taken after the second year of medical school, two parts of the second – after the fourth (last) year. Thus, all three exams are a kind of admission to residency, therefore, graduates of foreign medical universities must pass these tests in order to start working in residency.

Applications for the first and subsequent exams are made through the same Interactive Web Applications (IWA) system on the ECFMG website. The application consists of an “online” and a “paper” part, i.e. the candidate needs to fill out one application electronically and then send additional forms along with certified copies of educational documents and their translations to ECFMG by mail. If the candidate has not yet graduated from a medical school, he or she can provide an official letter from the rector or another authorized person of the university, which confirms the fact of training. As a rule, the processing time for an application for passing the first exam does not exceed 3 weeks. After this period, the candidate must select the exam date through the website of the Prometric organization since it is the provider company that administers all three parts of the USMLE. The cost of applying and passing the first exam in the United States is $880 and from $880 to $1,065 in other countries. Naturally, it is not possible to describe all the nuances of this stage in this article, so we suggest that you read all the requirements in the ECFMG Information Booklet, as well as on the IWA website.

It is also very important to follow a USMLE 7-year rule: ECFMG gives 7 years to pass all three exams. The countdown starts from the moment of passing the first exam. Moreover, when registering for the Step 1 and Step 2 CK exams, the candidate must choose the so-called Eligibility period, which lasts three months (for example, January-February-March). If a candidate is unable to register on the Prometric website and pass the exam during this time, he or she must apply for an extension of the period and pay an additional amount. If, after that, the candidate still cannot appear for the exam, he or she will have to re-apply to ECFMG and pay the cost.

After passing the first exam, the candidate must register for the second theory exam. The cost of passing Step 2 CK is the same as for the first exam. The registration process is almost the same as registering for the Step 1 exam, with the exception of the need to mail educational documents.

After passing the theoretical exams, the candidate must apply for the practical exam. In this case, the Eligibility period is 12 months. The cost of passing the third exam is $1,535. One should bear in mind that if theoretical exams can be passed not only in the United States but also in those countries where there are Prometric test centers accredited by the USMLE organization, then the practical exam is taken only in the USA in special test centers in cities such as Atlanta, Chicago, Houston, Los Angeles and Philadelphia. In this regard, the candidate will need to take care of getting a visa at the US Embassy in the country where the candidate lives. The third exam is also applied online through Interactive Web Applications (IWA).

The good news for candidates is that no certificates (for example, TOEFL) confirming knowledge of English are now required. Language skills are tested in the Step 2 CS practical exam.

Preparing and submitting an application for an American residency

As mentioned above, in order to get a license for a doctor of any specialty (with the exception of dental specialties), you must complete a residency, which is an American form of postgraduate medical education. A complete list of accredited programs can be found on the FREIDA website (The Fellowship and Residency Electronic Interactive Database Access) or the ACGME website (The Accreditation Council on Graduate Medical Education). Applications are submitted through the Electronic Residency Application Service (ERAS), which is administered by the familiar ECFMG organization. The process of assigning medical school graduates to workplaces in the United States, in turn, is managed by The National Resident Matching Program (NRMP), through the MATCH system.

Candidates begin sending applications to clinics and hospitals of interest in early July. The more applications you send, the more chances you will be admitted to one of the clinics. But you shouldn’t get too carried away either – each submission is paid: the first 10 applications will cost $65, the next a little cheaper. Usually, 30-50 applications are sent out. The letter includes the application form, 3 letters of recommendation, resume (CV), photographs and results of USMLE exams. Some internationally qualified doctors choose to take the USMLE Step 3 prior to admission to residency, as they believe this increases the chance of a successful placement. This approach also has a negative side – unsuccessful attempts will be counted and taken into account by the hospital representative. Applications are accepted until November 15, but since the deadlines may differ for each program, we advise you to contact the official representative of the Resident Program and clarify such questions. Towards the end of the year, the best graduates are invited for interviews.

Typically, each candidate goes through 10 to 20 of these interviews. In February, prospective residents draw up lists in which they indicate, in order of preference, the hospitals where they would like to study. In turn, hospitals also compile graduate lists. The MATCH automated system then distributes them. The results are announced in March, and as early as next month, hospitals are starting to send out contracts for new residents. Very few places are left open each year. Any doctor who has not received a contract after assignment can apply for these places. This process is called Scramble and, as our practice shows, it is the best opportunity for foreign graduates to get into the American residency.

Separately, it should be said about visas. To undergo residency, the candidate must apply for a temporary work visa (H1-B) or a visa for persons coming under the exchange program (J-1). You need to be very careful since not all programs sponsor visas, so not all accept foreigners.

The length of study and work in the American residency differs depending on the specialty. For example, a therapy program lasts on average about 3 years, an anesthesiology program – 4 years, surgery – 5 years or more. Our experience shows that it is easier to get a residency in such specialties as internal medicine, anesthesiology and family medicine than in gynecology and surgery. The salary in residency is about $40,000 – $50,000 per year.

After completing his/her residency, a doctor in the United States can practice in a private or public hospital, work in a university clinic (we call it “stay in the department”), or enroll in clinical graduate school. The latter is of two types – research fellowship and clinical fellowship. Most physicians go to clinical graduate school in order to get a narrower specialization. The duration of training as a clinical fellow is 1-3 years, the average salary is $60,000 per year.

Applying for a license with the Medical Board

The last step is to submit an application to the medical committee of the state in which the doctor plans to work. A list of all committees can be found on the Federation of State Medical Boards’ website.